Skip to content
ã€ Instrument R&D ã€‘In recent days, the team of Wu Kaifeng, a researcher of the State Key Laboratory of Molecular Reaction Dynamics at the Dalian Institute of Chemical Physics, Chinese Academy of Sciences, has studied the perovskite quantum system systematically using femtosecond transient spectroscopy. The exciton recombination and spin dynamics of the dot system reveal the effect of quantum dot size and composition on Auger recombination and spin relaxation life, and the manipulation of spin state energy is realized based on the optical Stark effect. It is of great significance for understanding the basic photophysics of perovskite quantum dots and their applications in optoelectronics and quantum devices. 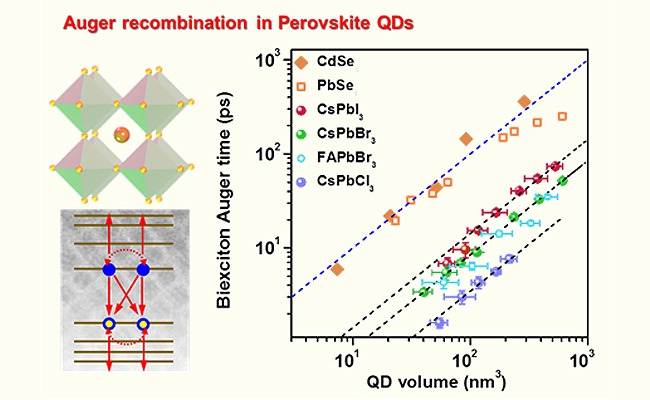 Lead-halogen perovskite materials have shown great application prospects in the field of optoelectronic devices, and nanocrystalline materials based on perovskite have also been widely studied recently. In the literature, perovskite nanocrystals are often referred to as quantum dots (QDs) in general, and the size of these nanocrystals is usually around 10 nm, which is larger than the diameter of the Bohr excitons of the material. Strictly speaking, only the strong confinement nanocrystals smaller than the diameter of Bohr excitons can be called quantum dots. In the strongly restricted domain, QD exhibits many novel photophysical properties, such as adjustable absorption and emission spectra, significantly enhanced multi-exciton Auger recombination and its inverse process (multi-exciton generation), and rich band edges Fine energy level and carrier wave function strongly delocalized to the surface, etc. The Wu Kaifeng team carried out the photophysical and photochemical kinetics studies of the QD of perovskite in a strongly confined domain earlier in the world, and revealed the enhanced interface triplet energy transfer of the wave function delocalization (Nat. Commun., 2020; J. Am. Chem . Soc., 2019) and heat exciton non-adiabatic relaxation (Chem. Sci., 2019) and other phenomena.
In recent work, the team systematically studied the double exciton Auger recombination dynamics of perovskite QD based on a series of lead-halogen perovskite QD samples with adjustable size and composition. As an ultra-fast non-radiative recombination method, Auger recombination has an important impact on the application of QD in lasers, light-emitting diodes and photovoltaic devices. Therefore, it is necessary to measure and understand the Auger compound dynamics of perovskite QD. The team found that the Auger lifetime of the perovskite QD showed a linear dependence on the QD volume, and the Auger lifetime was basically independent of the cationic component at the A site, but was sensitive and dependent on the anion component. In addition, all perovskite QDs have significantly shorter Auger lifetimes than traditional QD materials such as CdSe and PbSe. The team gave a semi-quantitative interpretation of the observed life laws based on physical parameters such as interband transition probability and energy band structure. These scaling laws of Auger life provide an important reference value for the application of perovskite QD devices.
In addition to being used in optoelectronic devices, lead halogen perovskites also have important basic research value in the fields of spintronics and quantum informatics. This is because the lead element causes a strong spin-orbit coupling, and is particularly suitable for injecting spins by optical means and manipulating spin-related properties. However, spin-orbit coupling on the other hand also causes rapid spin flipping, which limits the spin lifetime of photogenerated carriers. The team proposed that the strongly limited perovskite QD has discrete band-edge energy levels, and it is possible to extend the spin life by suppressing phonon scattering. The team used circularly polarized femtosecond pump light to resonate spin (or quasi-spin) quantum states, and used femtosecond light with the same or opposite circular polarization to detect the decline or growth of quantum state signals to obtain spin flips dynamics. The results show that although quantum confinement can suppress the phonon scattering mechanism to some extent, there is a nanoscale-induced ultrafast spin relaxation mechanism in QD. These mechanisms include electron-hole exchange, surface scattering, and spin flipping caused by the interaction between spin and surface dangling spin, and there are universal size-dependent laws in different materials. These physical laws provide an important research basis for the application of perovskite QD in spin-related fields.
In addition to measuring the spin life, the team also implemented purely optical means of manipulation of the QD spin state of the perovskite based on circular polarization femtosecond pump detection technology at room temperature, namely the optical Stark effect (OSE). The quantum confinement makes the edged exciton transition of perovskite QD have great oscillator strength, which is especially suitable for OSE observation. The team used non-resonant circularly polarized femtosecond light pumped samples, and observed a huge Stark shift when using the same polarization femtosecond light to detect the sample, making the original degenerate spin state energy split to nearly 10 meV . The QD band-edge transition dipole moment obtained from the Stark displacement is equivalent to the highest value reported by various materials in the literature. This result indicates that perovskite QD does have important application prospects in the field of quantum information based on optical spin manipulation.
The above research results were published in "Angel. Chem. Int. Ed.", "ACS Energy Lett." and "J. Phys. Chem. Lett." ). Relevant work was supported by the National Natural Science Foundation of China, the National Key R&D Program, the Chinese Academy of Sciencesâ€™ pilot project â€œEssence and Regulation of Energy Chemistry Conversionâ€, and the Liaoning Xingliao Elite Program.